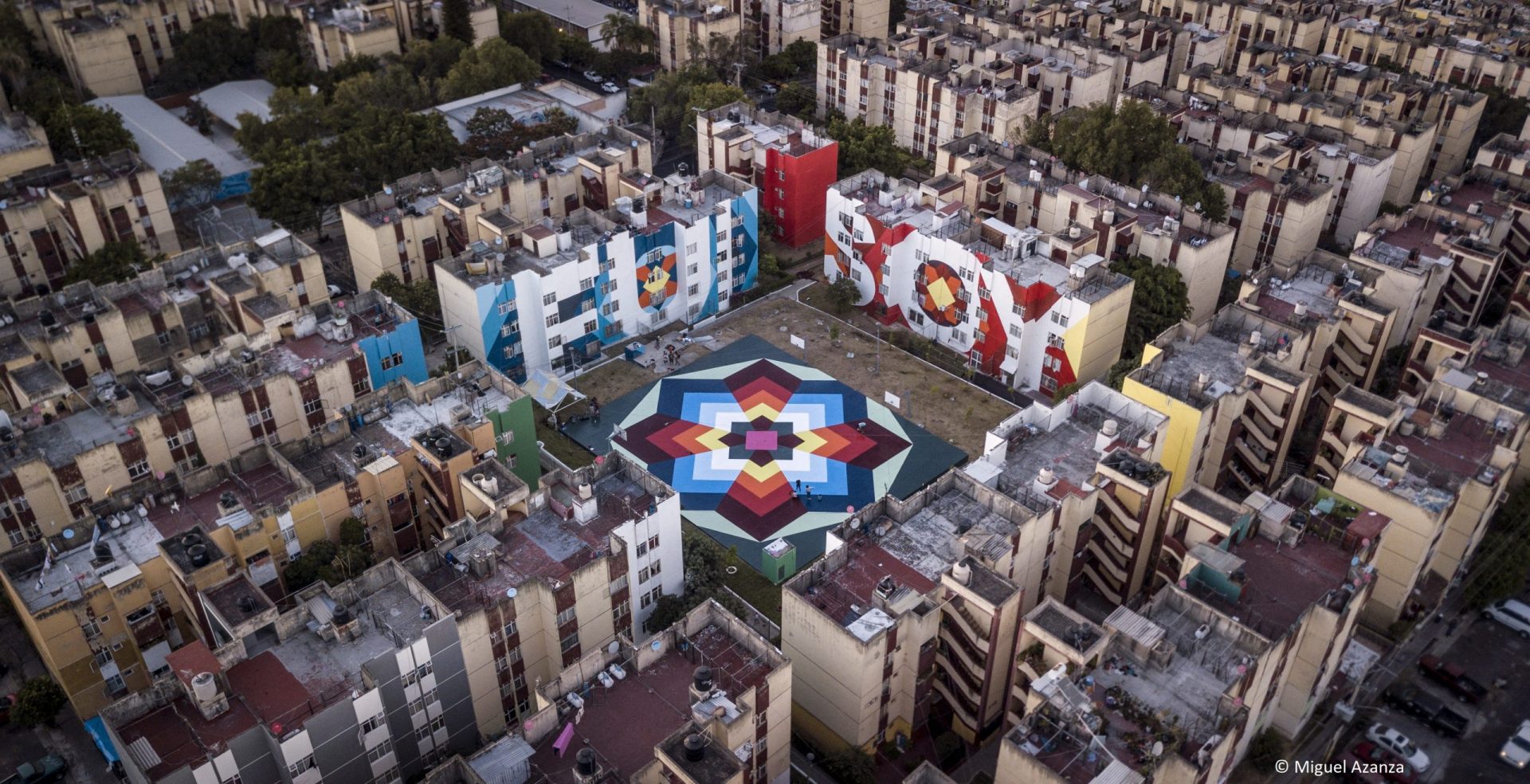 It is really impressive what can be done with a few colours, letters, forms and lots of helping hands. A once dreary looking facade of a residential building in a rundown area in Panama shines in a new look. And with an important message on its walls: „Somos luz.“ („We are light.“) So that everyone including the inhabitants is reminded that dignity is not tied to financial status. It is a fundamental right of every person. Even if the area is considered dangerous and drug traffic seems to be the order of the day, people live here. And they want to be respected.

The painted house in Panama city is one project of the Madrid based art crew „Boa Mistura“. The young artists create street art painting walls, streets, houses or public squares. Their aim is to embellish public spaces by giving them colour and – in some cases and for some areas – giving hope to the residents. By involving people in their creative process, they want to encourage them to shape the place they live in so that they feel comfortable there. So their hearts beat not only for art but also for people.

„We were really bad soccer players“

The five protagonists of Boa Mistura met in 2001 at age 15. „We were really bad soccer players“, tells me one of the founders, Pablo Purón. „So we had to find a different hobby and discovered our mutual enthusiasm for graffiti.“ Even though after their school graduation each one of them went off to study different subjects, their studies were all related to creativity. In consequence they all ended up in the creative sector, be it as an architect, a grafic designer or a filmmaker. Through their years of studying they kept in touch and finally formed the group „Boa Mistura“. It is Portugese and means „good mixture“. „It sounds nice and it represents our group. Everyone of us has different abilities to contribute, which makes it a good mixture“, explains Pablo.

Many projects are social focused and financed by cities and municipalities

The group started working full time on their art in 2010. They opened up a studio in Madrid and took the leap of faith to work as professional artists. „It is a difficult way of living and in the beginning it was hard. But since some years we see our efforts pay off“, says Pablo. Today they have three more people working for them and the crew expands according to the workflow. The assignements nowadays come from city municipalities all over the world where Boa Mistura is asked to paint city halls, public places and walls. Very often the art projects are social focused. In that case it is mostly NGO´s contacting the artist group to do projects in neglected areas and neighborhoods – like the one in Panama city.

„Bringing positive change in people’s lives is the best feeling.“

„We did the first project of this kind in South Africa in 2011. It changed the way we percieve our work profoundly. There we discovered the power of collaboration“, Pablo says. The project took place in the biggest township of Capetown, Khayelitsha. The owner of a small cycling school had asked the group to paint containers in which the school was housed. And out of a spontanous intuition the Madrilian artists asked the kids to help them paint. As the kids were immediatly on fire, they organised lots of additional supplies and started painting. „We saw that the kids took a lot of pride in their contribution to the project. It was empowering for them to be able to create something on their own“, describes Pablo. For him, it is particularly rewarding when he can bring about positive change in peoples‘ lives with his work. „It´s the best feeling and it makes you grow“, he summarises.

Since 2011 the artist group has thus realised many social focused projects. In many cases Boa Mistura works together with social organisations. But sometimes there are project that are very dear to them without funding. In these cases, they try to realise the project anyway and pay the expenses out of their own pockets. Like the last one implemented in Europe’s biggest informal settlement Cañada Real near Madrid.

Cañada Real: Giving a voice to those who are rarely heard

At the beginning of October last year, the Spanish government turned off the electricity for the 4000 inhabitants of the informal settlement, a condition that, according to Pablo Purón, is not acceptable. So he and the Boa Mistura team decided to give these people a voice and to raise awareness for their problems. They lit 4000 candles, each for one inhabitant, and formed the sentence „Nos están apagando“ („They are turning us off“) in huge letters to see from far. The candles have been collected and lit by the neighbours during a January night. „There are a lot of NGOs and other organisations who help people in their way. Our tool is art“, explains Pablo. By spotlighting a certain problem, the artists intend to give a voice to those who are rarely heard and at best start a public discourse.

Apart from being able to make art, it is especially this exchange with the inhabitants that is most enriching for the young artists. Thus before the actual painting process starts, the team talks to the people living in the project area. They listen to their stories, their concerns and problems. These conversations often trigger ideas and most of the times the inhabitants are included in the process of deciding what to paint and how. In that way the actual street art is turned into social art accessible to all, turning gloomy corners into bright, optimistic places. Not only in the literal sense of the word, as Pablo summarises: „In the end we leave something more than paint.“

Scroll through our gallery to discover more of Boa Mistura’s work: