San Francisco's Haight Ashbury neighborhood is where the flower power and peace movements of the 1960s originated. 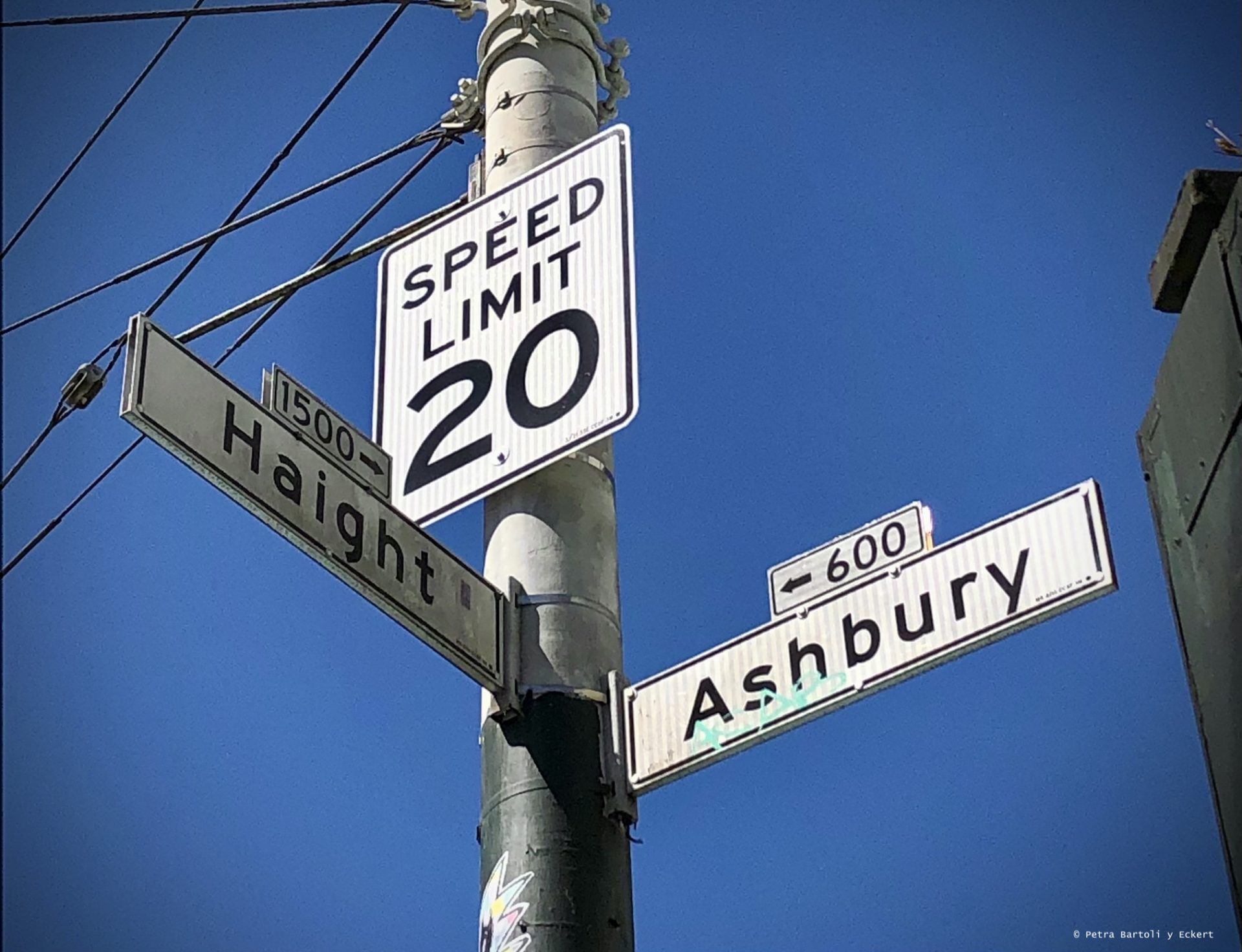 In the past weeks I was on the road in the USA. One of my stops took me to San Francisco to the legendary neighborhood of „Haight Ashbury“, where the Flower Power movement had its origins. What this street intersection triggered in me and what I experienced there has kept me busy for a long time.

When you hear San Francisco, you probably first think of the Golden Gate Bridge, cable cars and Chinatown. I have seen all of that, of course. I walked across the city’s landmark – the huge red bridge. I ate in a Chinatown cookshop and took a ride on the historic tram. But what impressed me even more was the trip to a very special corner of this Californian city on the Pacific: Haight Ashbury. 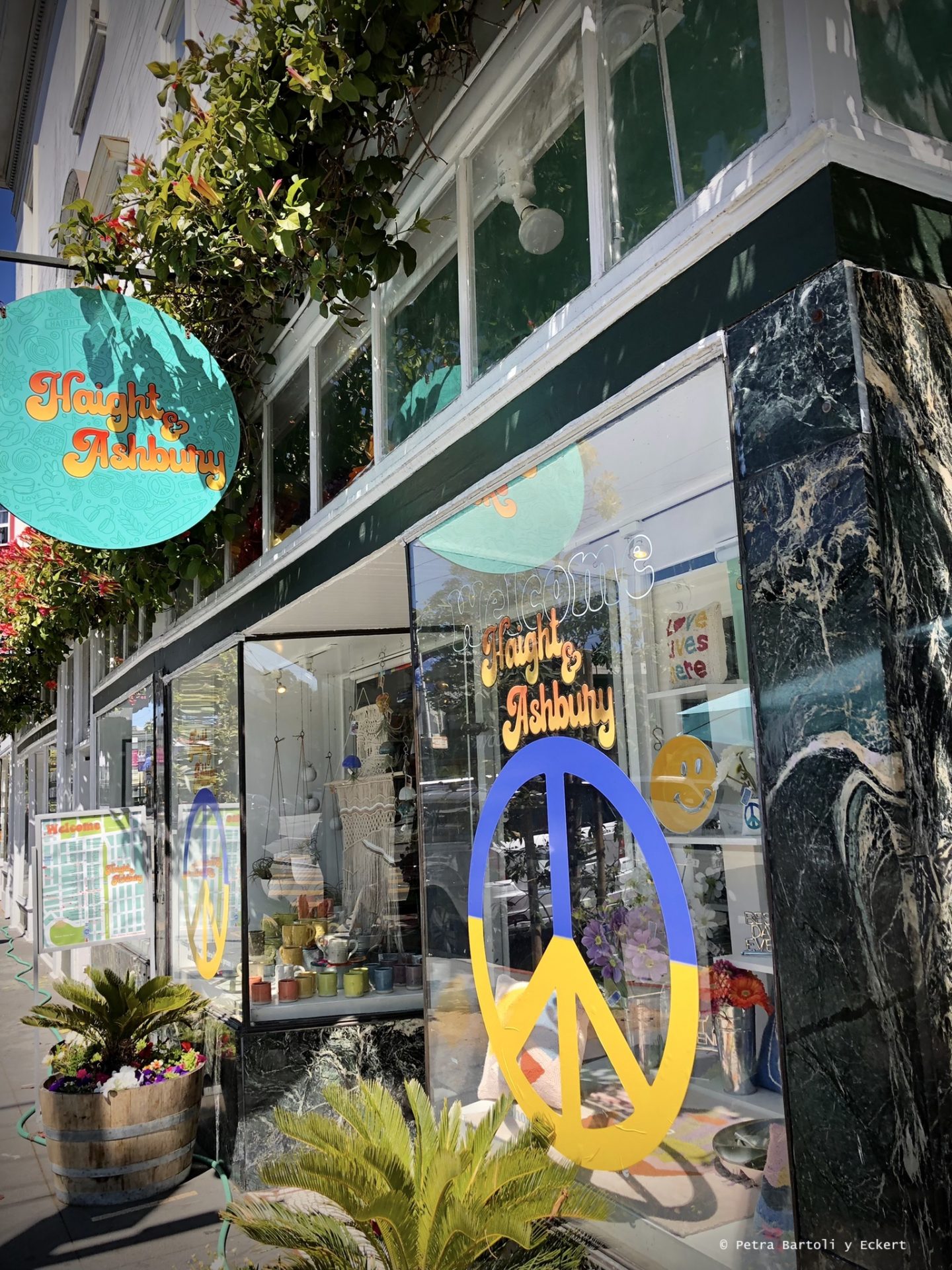 The neighbourhood is named after the two streets that intersect here. Haight Street runs from east to west. Ashbury Street runs uphill from north to south. Colourful, often lovingly renovated Victorian houses characterise the district. I stroll past shops that seem to have fallen out of time. The five blocks of Haight Ashbury are filled with record shops and second-hand shops with bell-bottoms, batik shirts and wide, brightly coloured dresses. And lots of bric-a-brac shops with hippie souvenirs.

Love and Peace – The peaceful revolution of the 1960s

But what makes the district so special is its history. It was here in Haight Ashbury that the flower power movement began in the late 1960s. Its climax was in the summer of 1967, which went down in history as the „Summer of Love“. Young people wanted to protest against the Vietnam War with a kind of peaceful revolution – and laid the foundation for a completely new attitude to life. People took to the streets in droves. And they attended the many free concerts that popular bands like the Greatful Dead, Janis Joplin or Jefferson Airplane gave in the middle of Haight Street.

The district is still an artists‘ quarter today and casts a magical spell over me. In a colourful hippie shop, I read on a poster where the band members of Greatful Dead lived back then. I start looking – and a few minutes later I’m standing in front of a beautiful grey house with a long entrance staircase. With my head on my shoulders, I imagine what the band’s daily life must have been like in this house in the 60s. An older woman stands next to me and follows my gaze. She wears colourful clothes, smiles and nods. „Yes, that’s where they lived“, she says, assuming that we are both thinking of the same people. Judging by her age, she must have experienced the time as a young woman.

On the trail of legendary Flower Power Musicians

Suddenly she reaches into her shoulder bag. „Look, I have an old telephone book page. With Janis Joplin’s entry!“ She holds a densely printed, worn paper under my nose. And sure enough, right at the bottom it says: Joplin Janis. With street, house number and telephone number. I thank the woman for sharing her treasure with me and make my way to the address given.

The singer Joplin’s house – one of several she lived in around here – is lime green and has a red front door. A van is parked in front of it, from which a workman is fetching tools. He turns around, sees me and grins. „You’re looking for Janis‘ house? Then you’ve come to the right place!“, he says. „But she only lived there for a few months. Here in the neighbourhood the rents were extremely cheap in the 1960s. Well, after the lease expired, she looked for a new place around the corner.“ He shrugs.

„Did you know Janis Joplin personally?“, I want to know. The man nods. „Yes, but not that closely. So really only from a distance. For that I was a stooge for Jefferson Airplane. That was a great time. I was in my early 20s then. The movement changed a lot. Not least my life.“ I look at the man. „Maybe you’re really famous and I just don’t know it,“ I say, grinning. The man starts laughing uproariously, shakes his head and points to his van. „Famous people work something different from me. No, I’m not famous. And I’ve made the jump.“

Sunny and dark sides of the Flower Power Era

That’s a good thing, too, I think. Because life here in the 1960s didn’t only have good sides. Besides the idea of love and peace, there were also a lot of drugs involved in the flower power era. And addiction claimed its victims. Janis Joplin belongs to the „Club of 27“ – those artists who died at the age of 27. In Joplin’s case it was a heroin overdose.

I say goodbye to the friendly craftsman, take in the neighbourhood one last time and move on. The slogan of the 60s movement follows me like a mantra. Love and Peace. Love and peace. Everywhere. For all people in the world. How important that would be today too! I feel exhilarated and blessed by the nice encounters. And thoughtful.

You can find more articles about peace here:

Gina from Make Someone Happy:“We can make a big difference in the world.”