Dozza:
Where not only people but walls are alive, too

Dozza is not just a place for art. It shows how important it is that we humans stay connected to each other through stories.

Dozza in Emilia-Romagna is a small Italian municipality near Bologna. It belongs to the association of the most beautiful villages in Italy, the „I borghi più belli d’Italia“. The imposing fortress – la Rocca Sforzeska – welcomes you right at the entrance to the village. In recent times, however, the medieval village has become particularly famous for its art on the walls and walls of houses and the biennial „Biennale del Muro Dipinto“ – the Biennale of the Painted Wall. The stories that come alive in the small, winding alleys bring you closer to Italy, the people who live here and what they deal with in small and large ways in an endearing, empathetic way.

In 1960, artists painted exterior walls in the medieval village for the first time, establishing Dozza’s reputation today. Tornaso Seragnoli, then mayor of the village, had the idea of a „Festival Muro Dipinto“, a festival of the painted wall. Art has always attracted people even from outside. So in 1965 the event was transformed into a biennial and attracted more and more national and international artists.

Since 2005, the festival has been organised by a foundation, the Fondazione Dozza Città d’Arte. In 2015, the commission that selects and invites the artists reorganised itself. As the foundation confirms, the selected artists are asked to submit initial sketches of their planned works. But they are free to choose the theme and techniques, which also depend on the walls made available. In this way, over 60 years of visual  testimonies have been created of what people deal with, what moves and  challenges them in different life situations – in personal as well as social contexts.

Dozza – a living, growing museum that fascinates and invites to be discovered

The medieval house walls and alleyways are home to over 200 painted works. Among other things, they tell of haggard women from the deep south, the alter ego behind carnival masks, lying on the beach, the world of the peasantry, moments of life that one somehow tries to get through, of fabulous and other exotic creatures.

The murals, a small brochure reveals, are created with tempera, fresco, mixed techniques and, increasingly, acrylic. According to the brochure the fresco technique is the oldest and longest-lasting type of mural painting and is so well established that all murals are commonly referred to as frescoes. One paints with mineral colours on a still damp plaster base of lime, sand and water. In this way, the frescoes retain their original beauty for a long time, even when exposed to different weather conditions. Some works of art, however, have been removed from the walls using certain techniques and transferred to a canvas or other solid support in order to preserve them. Now they can be seen in a documentation centre in the castle. 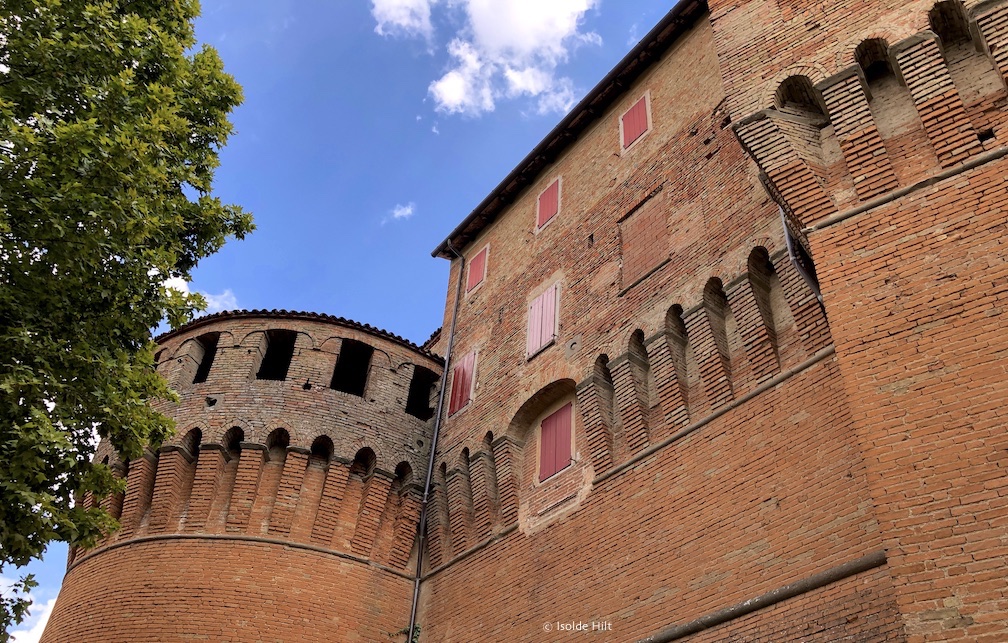 The castle itself is also worth a visit. In the Renaissance, Caterina Sforza transformed it into a fortified castle. And the Campeggi/Malveggi family used it as a noble residence. It tells its own story of what life in Dozza was once like.

More information in Italian and English about Dozza and what’s on offer can be found here: https://emiliaromagnaturismo.it/en/towns/dozza