Under the pseudonym Ememem, an anonymous French street artist has been drawing attention to himself with colorful mosaic works for several years. To heal the street and the people. 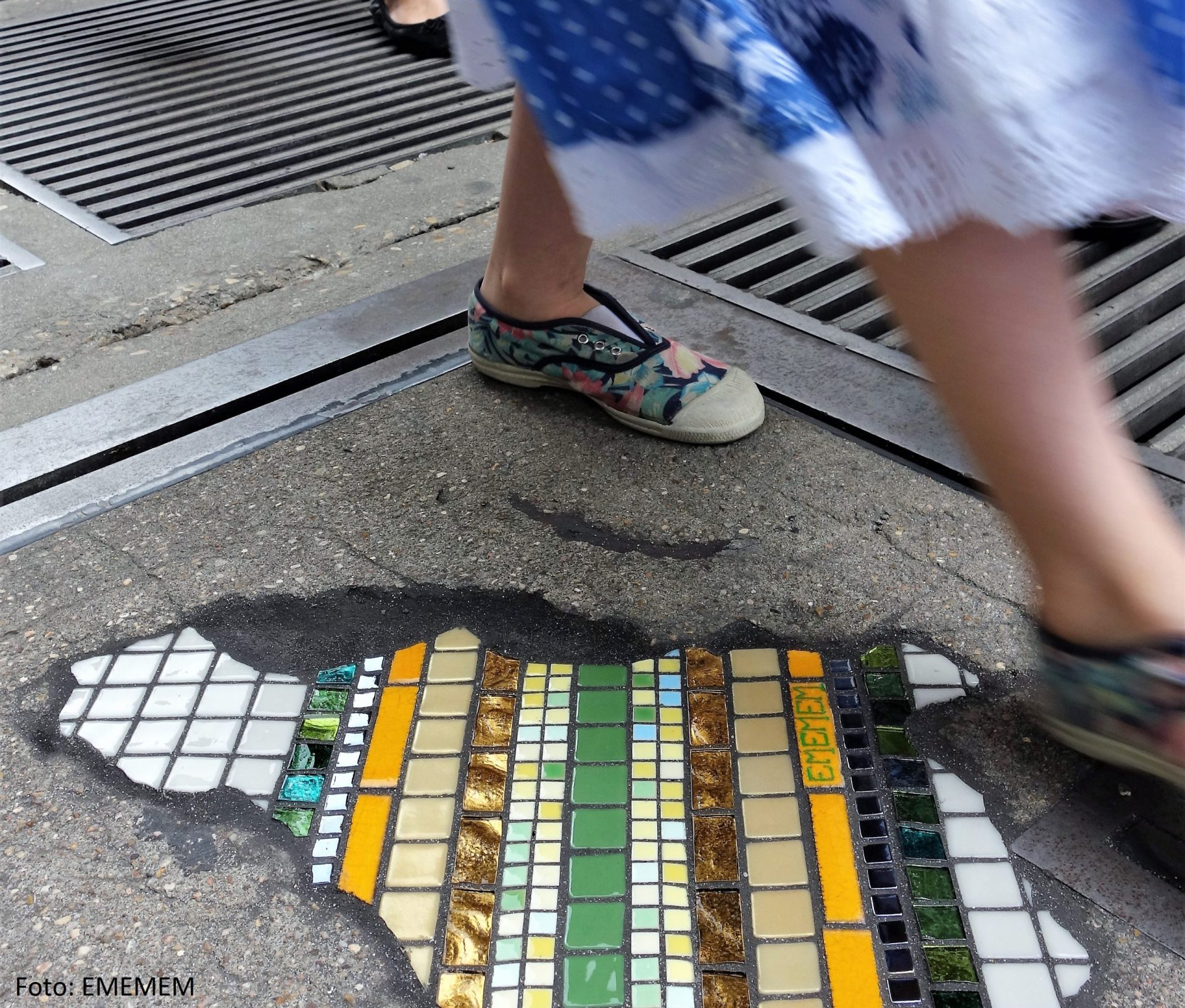 Anyone traveling to Paris or Lyon in the near future should cast their eyes not only on the magnificent building facades, but also on the ground from time to time. Because this look down at the street could well be surprising. Instead of the usual holes and cracks in the asphalt, you can discover something special here in some places: art, in the form of colorful mosaics. This is the work of a mysterious street artist who – like most in his field – remains anonymous.

He calls himself Ememem, the „asphalt patcher,“ because he has made it his goal to mend holes, cracks and fractures in the ground. The mysterious street artist „repairs“ the road in an artistic way and brings colorful splashes of paint to the cities with his mosaic stones. He calls the technique he uses „flacking,“ named after the French word „flaque“ for puddle. It describes the „art of fixing holes,“ as Ememem says. But that’s an understatement, of course, because his works are both artful and poetic and have since found many fans worldwide.

With the first „asphalt patch“ Ememem is born

According to Ememem, the idea came about through a fateful incident. It was 2016 and a certain sculptor, whose real name is not known, was part of a Lyon underground artists‘ collective. According to him, he had been looking for a long time for a way to express his desire for art on the streets. One day he discovered a small pothole on the sidewalk in front of his studio. And he was magically drawn to it. The first mosaic artwork was created and with it the character Ememem was born. „It was just inevitable that I make this first patch for the little wound in the sidewalk. Everything I did before led me there,“ the artist describes the almost magical moment when his first piece of street art was created. He speaks poetically about it, as if the street was a person carrying a wound.

Colorful splashes of paint on the street, a smile on the faces of passers-by

Perhaps that’s why he calls himself the „tarmac surgeon,“ because he sees his art as healing for the street. But it is also healing for the passers-by. The colorful mosaic stones that fill holes and cracks make the street at this spot and the faces of people passing by shine. A brief pause, a smile, and on we go. Oh, how good it is that the eyes of people passing by are very often fixed on the ground anyway. The moment of surprise is certain for Ememem.

The „Flacking“ has many fans worldwide 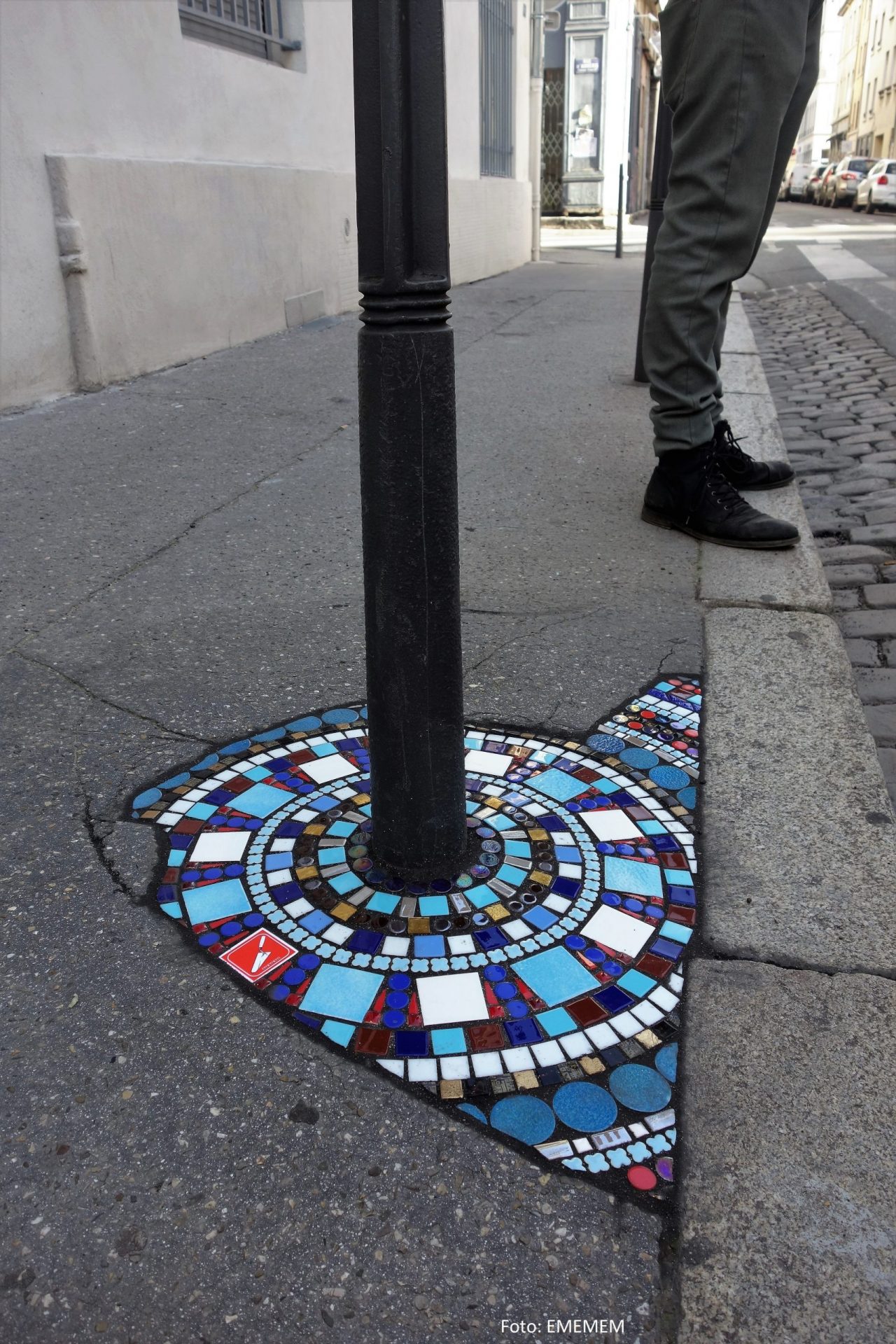 However, a large fan community has since formed around the French artist. The „flacking hunters“ are constantly on the lookout for new works of art. There is even an app that lists all the places on a „flacking map“ where Ememem has immortalized himself. Since the first „asphalt patch“, the artist has conjured up 400 more of these mosaic paintings on the streets of various cities around the world. On Instagram, over a hundred thousand people follow him. And in Barcelona, where in 2019, after the protests of Catalan separatists, he decorated the very street that had just been the scene of violence, his street artworks are now part of the city’s cultural monuments. And are cared for and protected accordingly. With such actions, Ememem makes it clear that his art also has a political dimension.

The anonymity protects and stimulates the imagination at the same time

And yet it remains unclear who Ememem is. On the one hand, the anonymity is supposed to protect him, because his activities – like all street art – are potentially illegal. That is why he „operates“ mostly at night. On the other hand, the famous unknown seems to enjoy playing with his self-created character, leaving room for people to form their own ideas about who he is. This stimulates the imagination; after all, Ememem is an artist, not a craftsman.

A community of „Anonymous Flackists“

And as an artist he is increasingly in demand, taking part in street art festivals and even being allowed to present his art in galleries in Paris and Geneva. For this, he creates replicas of his street art works so that they become „studio-ready“. And since last year, the artist has been getting more and more requests from various cities like Paris, Lyon or Geneva to place his art in public spaces in a planned way. This raises the question of how long he can remain anonymous. Because his latest project also aims rather at more visibility. He is launching a „Flacking Lab“ where aspiring flacking artists will learn the technique from him. In addition, there will be videos and tips online on how to create such mosaics. The idea is to create a community of „anonymous flackists“ who will patch up small and large holes all over the world.

Many thanks to Uta-Caecilia Nabert, who told us about Ememem!