Exclusive interview with Geri Weis-Corbley, the founder of Good News Network. Her portal for good news is the number one in the world. 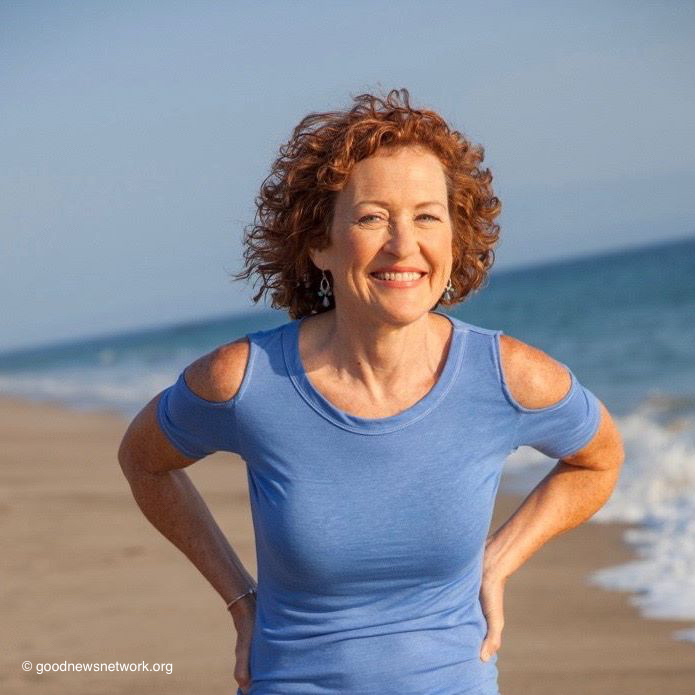 She is a very special woman. And she encourages all those, who have an unusual idea, that just won’t fit into today’s world. Geri Weis-Corbley started her project “Good News Network” 22 years ago, the first website that promotes good news worldwide. In America she is known as the expert of constructive news. The Washington Post once referred to her as the “Guru of good news”. Today her news portal gets millions of clicks every month. It made us curious …!

Around Christmas last year when I was in the US to visit my family, a very spontaneous idea came to my mind: why not just call the people from Good News Network in Los Angeles? Maybe someone of their team could answer all my questions: How they became so big on the market? How their idea was received at first and so on? Somebody who can stand the pressure of the market for so long has to know how to make things right.

I was very enthusiastic, when I heard Geri Weis-Corbley herself picking up the phone immediately. She was waiting at the airport for her connecting flight so we had time to chat for a while. We agreed on an interview and here it is – the success story of a woman, who did not let herself be fooled by anyone and always believed in herself.

Please tell me about yourself …

I started Good News Network while raising my three kids. I have 35 years of experience in tv production and online news media. I am a producer, director, editor, videographer and author. I appear on TV and radio and on stage as a public speaker, extolling the benefits of a regular dose of “News to Enthuse”.

I live in California now, after living near DC for 35 years. The business has taken off since I partnered with Anthony Samadani in Los Angeles, and we tripled our revenue last year.

Before you started „goodnewsnetwork“ you had a different job. What was that?

I worked as an editor in the TV news business in Washington DC, freelancing for companies like CNN, covering the White House, Congress, and more. I quit to raise a family and I had three children, ages 7,5, and 3, when I started the weekly updated website.

Where did you get the idea of publishing good news from?

Working in news, I thought there should be more GOOD stories covered. Later, after I quit the business to raise a family, the internet came to life, and I started a good news website to follow up on that dream.

How was the kick off of goodnewsnetwork? 20 years ago the internet was still new. Was it easier than today?

I just put up a website, and people found it. There was no social media or even blogs back then. It grew very slowly until the tragedy of 9/11, when people started googling „good news“ and they found me at the first position.
I joined Facebook in 2008 and started sharing more, and soon was serving a quarter million pages per month. In February 2020, 4.5 million unique users visited Good News Network.

I get emails all the time about how the website helps people get through depression and anxiety.

How did other media respond to your idea?

They were very skeptical, and made fun of my work always using the cliche of „a lost kitten up a tree“ being „good news“. But I was posting serious stories about peace, and business, and health – along with stories of kindness.

Do you make a difference with your good news? Do you feel like you are changing things?

There are now dozens of copycat websites doing the same thing I started way back in 1997. There is a need, other media companies saw it eventually. So, that was a big change. I always said I wanted to disprove the myth that „good news doesn’t sell,“ which is why I never became a nonprofit.

What was the biggest success of the first 20 years?

I was thrilled when I was mentioned on the CBS Evening News, when I was interviewed on NPR’s show „All Things Considered“, and when Rolling Stone featured me as a top website.

Did working with good news network change you in any way? How?

Yes, it made me look at life in my own family differently. I started living with a „good news“ philosophy looking for the good my children were doing, instead of focusing on anything negative.

You are the number one when it comes to “good news”, right?

Yes, number one on Google for „good news“ and „inspiring news“. Even when you type it in Arabic in the Middle East!

How do you fund your website? Do you receive donations?

Advertising on the site is the bulk of our revenue, but people also support us with donations even when they get nothing extra. They support our mission and say thank you with contributions of any amount between $2 and $500.

What is your dearest wish for the future of your news portal?

I want branch out into television, which is the medium I love the most. We are also expanding our podcast this month. It is called „Good News Gurus“, and is available on iTunes and Podbean.

How do think each one of us can change the world for the better?