New to your ears! A Peaceful Christmas

Last … Driving home for … We all know them, every word, every line. But this Christmas song is brand-new! A Peaceful Christmas by Marcus Klare

Many people dream of becoming a musician, singer or anything cool in this branch. Marcus Klare felt similar. As a teenager, he found his way to music via an old, completely out of tune piano. When his school band was looking for a drummer, he gave it a try. They even made it to the final round of a district competition in Munich. And then, a little later, the opportunity to record a song in a professional recording studio popped up! In that moment it is easy to already feel very close to your dream. But it all came a bit differently …

Today, about 30 years later, Marcus Klare is here with a song, that has a catchy tune. The title: A Peaceful Christmas. That makes us curious!

Dear Marcus, let’s start in the professional recording studio where you had the opportunity to record a song. The dream of becoming a musician seemed very close …

Yes, I was so enthusiastic about it that I wanted to make money with music. However, the recording studio owner told me: “Learn a ‚decent‘ profession and make music as a hobby. If it works out with the music  – perfect! If not, you can still make a living.” I am still very grateful for this advice. Professionally, I ended up as a freelance cameraman and editor for television, and from 1989 I helped to “build” regional television in Regensburg, Landshut and Rosenheim. Since 1997 I worked for the ZDF program “Leute heute” in Unterföhring, but have remained loyal to the district of Regensburg as a resident.

Even if your professional career has taken you in a different direction, you composed some songs that have been waiting patiently for many years to be set to music and to be heard. What are these songs? Which music genre are they?

I think my music is somehow a mixture of Dire Straits, Pink Floyd, The Alan Parsons Project and Phil Collins and certainly a few more, because these were the musicians and bands that shaped my youth. So somewhere between pop and rock.

What are your songs about?

Most texts are created quite spontaneously. Something inspires me and then I start to write it down. I remember a rainy day. As I looked out the window, a line suddenly came to my mind: “When I’m looking through my window, I see the pouring rain.” My fantasy then created many more pictures in my head and at the end I had song lyrics for 3:50 on my sheet. In most cases I’m already sitting at the piano or with the guitar on my knee and create melodies and chords to it.

With Tiny Sound you now have your own music label. Do you also publish compositions of others?

I don’t exclude that, but at the moment I only publish my own music projects. These days it is no longer that important to have a label. Everyone can now publish their music via the Internet, whether on YouTube or on the major streaming platforms such as Spotify or iTunes. This has the advantage that musicians and artists can be as creative as they want to be – without caring about clicks or sales (which are unfortunately much more important to record companies than the actual art). For a long time now, I’ve given up focusing on how I can reach the largest possible audience. I do „my thing“; I create the song how I like it. And with a little bit of luck, a few others will like it, too 🙂

You have just released a Christmas song: A Peaceful Christmas. You told me the song existed even before that. And now you have brought it to life. How did you do that?

I wrote my Christmas song at the end of the 90s. At that time, in a covert operation we quickly sang a choral version with the employees of the regional television in the recording studio. Unfortunately, I could not find the recording anymore. But I still remembered music and text. And in October I thought to myself: When, if not now? 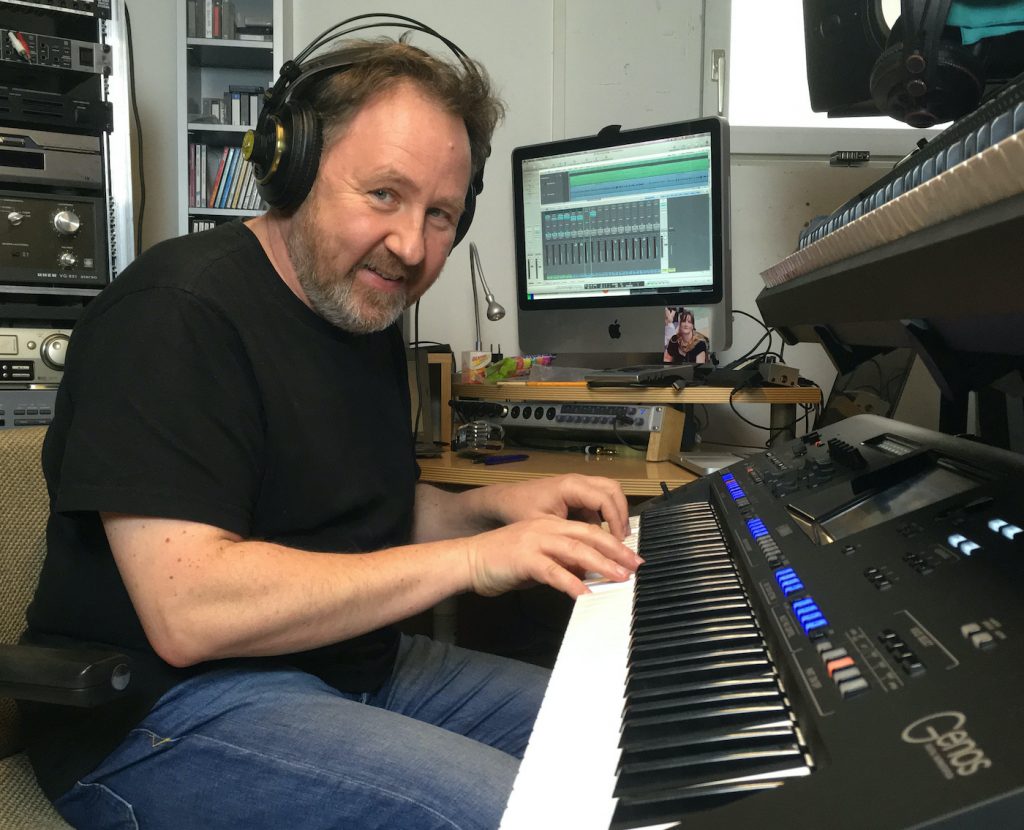 How do you find the right vocalist or, as in this case, the piano player?

On the one hand the Internet helps me out. There are various portals, which are lifesavers for artists during the current crisis. The singer Jessie Lynn Toups of “A Peaceful Christmas” lives in Nashville and has set up a small recording room at home. I sent her the song as MP3 and she sent me back her vocal recordings – done!

Holger A. Jung, the piano player, on the other hand, was the personal recommendation of a singer from Munich and is a real stroke of luck. I also send him an MP3 and he always comes back with brilliant piano accompaniments for my songs.

In “A Peaceful Christmas” you changed the lyrics once again and adapted them to the present day. What had to be changed?

Since everything had to be done very quickly, the first version of the text was not quite satisfying for me. It was simply the typical Christmas contents of candlelight and festivity. Therefore, I have tried to update the text and focus on the aspects “climate crisis” and “peace” that are particularly important to me. The singer from the USA was a crucial help. That’s why I also renamed the title from “Merry Christmas” to “A Peaceful Christmas”.

How does your song get into the world now?

Again via the Internet. Both versions of the song (band-version and piano-version) can be heard on all music portals or are available as download. And starting tonight there will be the “Official Video” on YouTube.

A Peaceful Christmas: What do you wish for the world with your song?

Apart from a “peaceful” Christmas, I wish from the bottom of my heart that the “decision makers” all over the world finally take care of our climate problems seriously and resolutely, as the lyrics say: “The road is long, and the work is tough, but if we all stand together, it just might be enough.”

Something else that is important to you …?

Besides music, I have been a big fan of radio plays since childhood. Even today I only fall asleep with a story. That’s why I started the children’s radio play project “Hexe Lindenbart” together with my life partner Martina Schaeffer. Tina has now written 6 episodes and it was her idea to include music in the stories. Since then, with every new episode, many funny and clever songs for children have been created. This is not only fun for authors and musicians, but also for the listeners, whether they are young or old. And it’s a great feeling to know that, especially in these difficult times, our radio plays bring a little distraction and joy into the everyday lives of children and parents.

Thanks to Johannes Schindlbeck for translation!

A Peaceful Christmas: the lyrics to sing along!

So let me take you by the hand
And walk through the winter wonderland
Enjoy the snow, while it falls where we stand
Our world is fragile, but oh it’s grand

We should trust our hearts and not pretend that we can’t see
The world needs help from us, if it’s gonna find recovery
The road is long and the work is tough
But if we all come together, it just might be enough

Be part of it when the video „A Peaceful Christmas“ starts on Sunday, November 29th, at 6 pm!

This article is also available in German!