One drop at a time leads to an ocean

Many small gestures of kindness work wonders, as Make Someone Happy proves. An interview on good news for you has already caused the first drops.

At the beginning, probably few people suspect that such a small thing can have such an impact. And it starts rather quietly: a gesture of kindness like a smile, an encouraging word or helping someone get into the car.

David, from Rhode Island, was amazed himself at what happens once you make a move and ask if you can be of assistance. He had heard Kristin Frauenhoffer’s interview with Gina Dodd about Make Someone Happy and immediately tried it out in practice. What amazed him the most – the impact on oneself. Make someone happy and you are happy!

My name is David and I live in Rhode Island, USA. I have been friends with Gina Dodd for over 20 years and was a follower of „Make Someone Happy“ from the time she founded it. As a friend and a follower, I enjoyed her effort and message to follow her father’s philosophy to change people’s lives by one small act of kindness at a time. However, that message really came to fruition for me two weeks ago.

An interview with good news for you gave the impetus

During a 30-minute ride to meet some friends for lunch, I watched the interview Gina did on the „good news for you“-news portal. I found myself nodding my head as Gina explained the analogy of how small acts, “like one drop of water at a time” can eventually create an ocean of positive action. It was a pleasant interview and I arrived at my destination, a local family style restaurant, a few minutes after it ended.

Make Someone Happy drop 1: „Thank you, young man, thank you!“

After lunch, I was the last of our group to leave the restaurant. I walked out the door and almost bumped into an elderly woman that was standing by herself, leaning on a walker and wearing a hard plastic brace around her midsection. I took a step to the side to go towards my car. Hearing Gina’s voice in my head, I couldn’t walk away. I quickly turned around and gently asked the woman if she needed any help. She slowly looked at me with both relief and uncertainty in her eyes, said nothing, nodded her head and then smiled.

A moment later her husband pulled up to us. Apparently, she was not capable of walking the distance to where the car was parked. So he had gone to retrieve the vehicle. He opened his car door and was having a difficult time getting out of the car. He appeared to be in frail condition. She took a step towards the car as I opened the passenger door and greeted the husband and told him that he could stay in the car. „She made a friend while you were getting the car“ I said, to which he smiled and labored to reach for his door to close it. I assisted her into the vehicle, folded her walker and placed it in the back seat. „Stay well and have a great day“, I said. „Thank you, young man, thank you!“ she said. And they drove off.

This entire encounter took only a few minutes, but it has had a lasting impact on me. The interesting part was that it actually made me feel good! I got in my car and immediately called Gina. I told her that the first drop had fallen, with many more to follow. 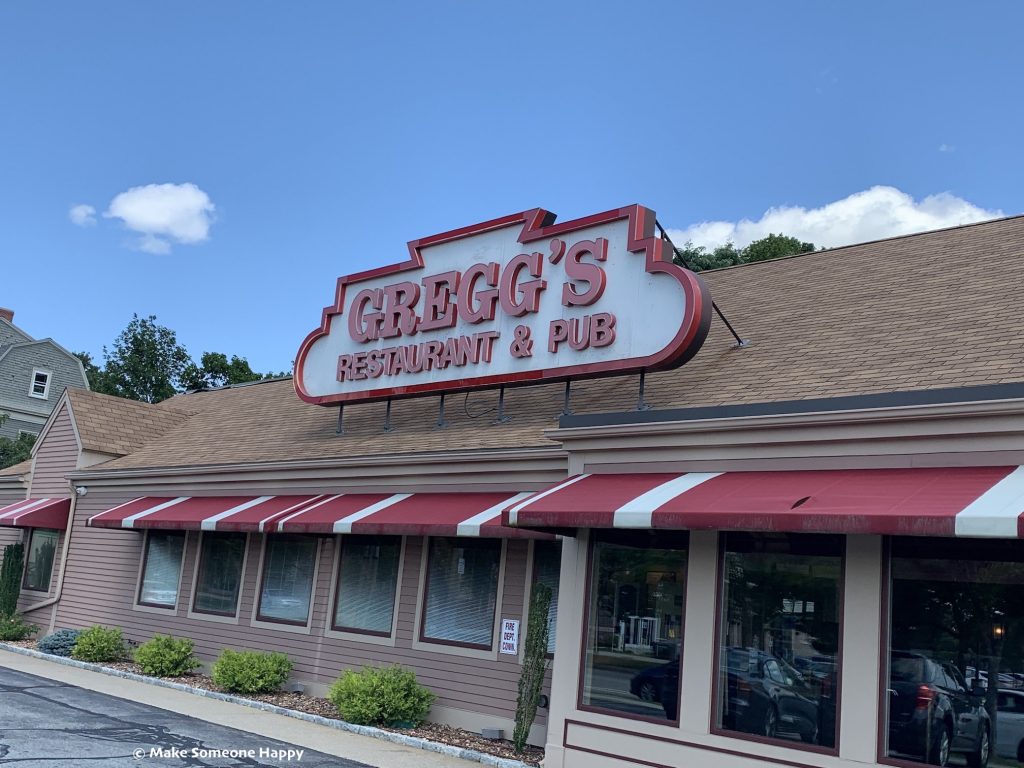 Make Someone Happy drop 2: „I’ll get you the next time!“

The next day I went shopping at a discount supermarket in which you bag your own groceries and that charges $.05 per paper bag. The difficult part is that you have to guess how many bags you need when you are checking out. This particular day, I overestimated by one bag. No big deal as I normally would just take it home. However, again I heard Gina’s voice. I scanned the crowd and saw someone that looked like they may need an extra bad. So, another drop of water fell as I just walked over, gave it to them and said: „Looks like you may need another bag“, and I smiled and walked away. As I was putting my groceries in the car, the other person wheeled their carriage by me and said „I’ll get you next time!“

I find myself, inspired by having watched the interview, looking for opportunities to do small acts of kindness. Sometimes it’s just holding the door open or saying good morning with a big smile. I almost feel selfish due to the joy it actually brings to me! „Drip, drip drip!“ 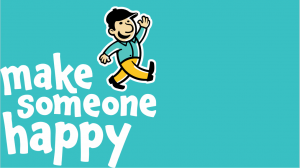 More information about Make Someone Happy:

The article in German language:

The interview that started it all!